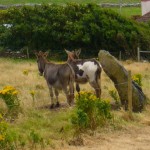 The blog title comes from a line in Dickens’ David Copperfield and refers to the moment when the otherwise dotty and capricious old Aunt Betsey Trotwood becomes a true heroine. It’s also a part of the story where, English Major that I am, the penny drops finally as to Dickens’ metaphors of donkey versus pony in the story as a whole. Betsey is a pony, Jane Murdstone is a donkey and, if you’re familiar at all with the story, that pretty much sums it up. 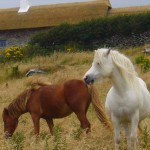 I would like to think of myself as a pony – small, comical at times but, ultimately, like David, the hero of my own tale and, in terms of a beast of burden, more noble than a mere ass but frequently looking like one…

This started as a form of archiving some older blogs. I’ve put thoughts down in blog form for years now and decided to consolidate a couple of the older ones. Haven’t been there for a long time but some of the thoughts are worth keeping afloat on the ether seas and maybe add to them again. Like salmon, we return to familiar waters.

A big thanks to Daniele Rossi for the new header – his interpretation on a sudden alarm of donkeys….thank you, my talented friend. Go visit his site, Stuttering is Cool  . He has had a podcast for years now, a great book out and is simply a wonderful guy. I am so lucky to know him.

3 Responses to Ponies vs Donkeys