I think it was chocolate 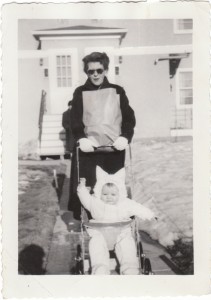 I am in the first generation to grow up with television.

My first memory is being in a high chair at what I’m pretty sure was my birthday party (I don’t know how many candles were on the cake because I couldn’t count yet but there was clapping and singing and cake…I definitely remember cake). The second memory I have is being carried up the stairs to my grandmother’s room to watch tv. There’s also a brief flashback of curling up with the neighbour’s big black dog and another of feeding an apple to the milk man’s horse. No, really: he was the last person in the city to use a horse drawn cart. When the horse retired, so did Mr. Williams.

How I know his name is another stupid long story ending in a coincidence you’d never accept in a fictional setting. 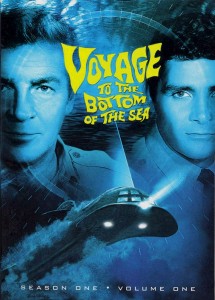 Anyway, back to tv: I remember shows like “Voyage to the Bottom of the Sea”. The main setting was a submarine with windows and more hallways than an aircraft carrier.  Heck, it had ventilation shafts the bad guy could rabbit down with half the crew (including poor concussed Kowalski) romping along in pursuit.

Grades 6 to 9 were spent running home every Thursday. Not just to avoid the bullies but to fly downstairs in time for the voyages of NCC 1701, better known to youse guys as the Star Ship Enterprise. The corridors looked much 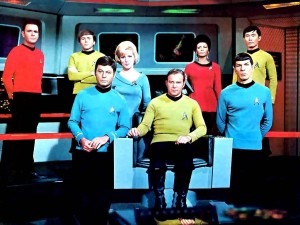 the same as the Seaview but the uniforms were way more happening.

Except for the boots.

It was just about that time push button phones hove into view, bringing us that much closer to flying cars and a meal in a pill. They were still attached to the wall. In the kitchen, where you could polish your code talking/interpreting skills.

Is this a ‘good old days’ sort of rant? Not at all. Look at our brand new small car sized television that is so clear and crisp you could diagnosis melanoma watching Hawaii 5.2.

As soon as you press the remote there it is: no waiting for the thing to warm up. No having to get up to change the channel. It’s a luxury to be frustrated by 5 seconds tossing cushions to find that other g-d remote to watch a movie on the blu-ray or on one of the several movie channels. Or that series from BBC on the streaming thingie.

Technology has advanced by leaps and bounds, obviously well beyond my grasp of the jargon. I have become that old woman who stands in the living room shouting for her daughter because I want to watch something on one of the 4 systems hooked up to the tv.

You see, those weren’t the good old days, these are. And here I stand in front of that giant LED screen looking like a cranky pants ranting about rabbit ears.