The French invented a cure for it

I thought the disappearing act was something that only happens to women as they age. By the time a woman forgets the name of that guy who played, oh, him, you know, the doctor on that show, she is pretty much invisible to everyone except the other women trying to remember what day it is and did they turn the stove off.

It’s not white hair. There are lots of young women who have white hair yet receive mobs of attention, albeit for their gravity defying features. There are also women whose hair doesn’t go grey at the usual rate: sometimes it’s genetics,

sometimes it’s denial in a bottle. I didn’t resort to a chemical solution but the little white mortality reminders have only just started to appear throughout my crowning glory in numbers too many to cull.

It’s not the clothes. There used to be few places with fashionable slipcovers to camouflage the sands that time keeps shifting around on the female form. The choice was between using military grade spanx to tuck mutton guts into lamb dress or, if you liked to breathe while sitting, there were polyester track suits in a choice of

cataract piercing bright colours. It is possible now, however, to find comfortable pants without an elastic waist and tops that don’t glitter like a Ziegfeld revival.

But just the other day a male friend who is within arm’s reach of 65 was talking about his growing awareness of invisibility. He has noticed that over the years when he glances at a young woman the reactions have changed as he has aged: at 25 he was tossed flirtatious looks in return; was sized up for financial value at 35; viewed with utter disgust when he was nearing 45 and treated like one of the girls by 55. Once he passed 60, people 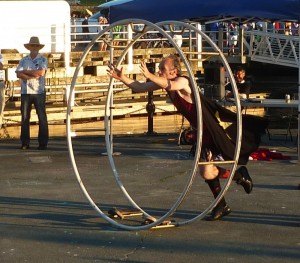 under the age of 40 didn’t seem to notice if he was in the room. Men or women.

I guess the Club Fantome Gris is not just for ladies.  And I, for one, plan on having a lot more fun now that I know no one is looking. 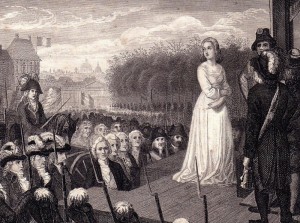 The only cure for grey hair.