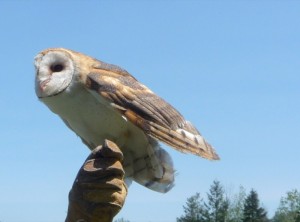 I’d never seen an owl outside of a cage before. Even when others were pointing at barn rafters or up into trees, “There; there it is, can’t you see it? That’s the biggest barn owl I’ve ever seen!” I’d nod and make unconvincing ‘ahhh’ sounds as if I was sharing in this Wild Kingdom moment.

That’s when my husband would grab the top of my head and attempt to line me up with his nose and extended arm like a gun site. It never worked. Mostly because he’s over 6 feet tall and I’m 5 foot 3 in my dreams.

I’d seen owl pellets and heard their calls recorded in excruciating detail. There are so many different types of piercing calls to differentiate between all owls, lesser and greater, burrowing and nesting, snowy and barn.

Mind you I’m not a very woodsy type person. I used to like camping in tents and being out in the crisp cold air of the mountains or down by some river relentlessly carving its destiny through sandstone and granite.

That was back in the days when I could play along the river bank or explore the mountainside while my mother aired the sleeping bags, made lunch, did the dishes, took the sleeping bags back down before it was time to start supper. Now I’m the mom and the closest thing to camping I’ll do is stay at a budget chain motel.

It was one of those beautiful dry, clear, crisp November nights that occasionally bless our end of the island. The PAC meeting had ended early enough I felt comfortable walking home despite it being after dark. Peaceful moments I could hoard all to myself were still a rarity and a velvet black night was a moment not to be wasted just because of urban paranoia and old wives tales.

I was was on the steep downslope of Lampson Street. The busy traffic on Esquimalt road was just far enough away to be lights scuttling along without much sound. From the dark night sky above me a white sinuous shape emerged and twisted towards me. The broad span of wings made no noise even when I was staring into two enormous yellow eyes taking my measure. The creature of the night changed direction again, effortlessly banked around me and, with one indifferent flap, landed atop a nearby telephone pole.

There was no doubt in my mind this was a bird deserving the name “Great” something. A picture clicked in place and I knew I was looking at a Great White Owl. Even at the top of a pole twenty feet away from me it easily dwarfed any local bird I’d ever seen swinging on phone lines or hopping across the road after a bit of tasty garbage.

We watched each other for a few minutes. I was thankful had decided to walk home that night and even more thankful I was not a mouse. With a shrug, the beast lifted itself into the air and disappeared as silently as a wish into the night.

I stumbled home laughing and babbling silly things in an attempt to get my story right for the telling when I burst through the door. 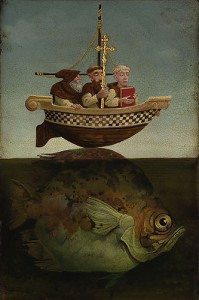 As soon as there was a break in the reality game show action, I acquainted my family with the adventure I’d had on my way home. I kept up the chatter while finishing the dishes. When the phone rang I shouted for someone, anyone, to raise their attentive bottoms from the comfort of the couch and answer the damn thing.

It’s never good news when the phone rings after 9:00 pm. Certainly no one phones after 9:30 to announce you’ve been randomly selected for a complete home make over or an all expenses paid vacation for your family to a resort in the Azores.

My sister was quiet and firm. Dad was in hospital, a stroke. The doctors didn’t know how bad it would be for a little while yet. The chances of his recovery were not good but there was still hope.

Two nights later my sister drove me directly from the airport to the hospital. Out of the dark silence of that drive we were startled when an owl flashed through the car’s headlights as it pursued some poor doomed creature through the countryside south of Edmonton.

At the hospital, in the curtained twilight, I held Dad’s hand and whispered goodbye. The angel came for him one night later.

The other day a poor juvenile Barred Owl was caught in the yard by daylight and a murder of crows harassing him in that uniquely exuberant crow way. I know there is an increase in owls around here part of a general resurgence in urban population 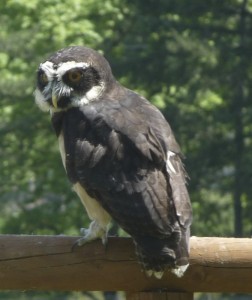 of raptors. There is no special significance, no poetic harbinger of good or ill fortune.

But no matter what anyone says, now that I’ve looked into them, there is something unsettlingly familiar in those big yellow eyes.