Graffiti or art in the post-modern renaissance 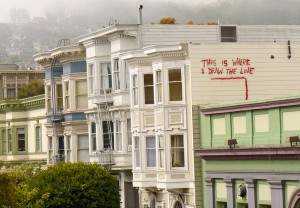 This is a column I wrote for the Esquimalt News, it was printed in October of 2001 but it still works…go figure…

I have this fantasy of mixing coloured rocks in with the paving compound when city works crews aren’t looking. Then everyday would look like cherry petals had just fallen onto the road patches. Of course it’s hard to loiter inconspicuously with a large sack of crushed rock so I expect it will never get a trial run. And my dearest would cut off my ice cream supply if I made test patch out of our driveway.

I guess one person’s earnest if somewhat questionable sense of artistic improvement is another’s pile of visual poop. 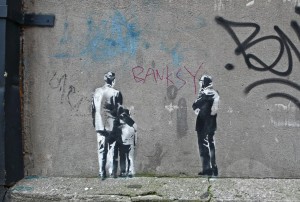 This summer I had the extreme pleasure of traveling through a few neighborhoods in Europe. I saw art, lots of it, traditional and modern, plus an entire industry based on telling you who did what and why it is important. Being budget travelers, we picked up most of our information by hanging around at the back of tours for which other tourists had foolishly paid outrageously high prices. I was impressed with it all, especially when the guides weren’t giving us dirty looks and we could actually feel the power of a piece. 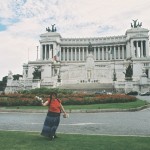 me getting in the way of history

You couldn’t throw a cappuccino in any direction without splashing a statue, mosaic or some mucky great piece of monumental architecture. After awhile we stopped flipping desperately through our guide books and just shrugged when stumbling upon some gleaming marble monument topped with Winged Victories holding out bronze laurels to some really terrific bloke who must have done something truly neat or, more likely, slaughtered more folk than the fellow whose monument we’d just passed one alley over.

In between visiting churches, museums and beaches, we took trains everywhere. Just like here, the train yards and brick fences of the right-of-ways are covered with graffiti. But every so often, buried among the spray paint equivalent of boys writing their names in the snow, recognizable works would leap out: an abandoned boxcar transformed into a winter scene; accurate, albeit unflattering, portraits of prominent politicians. I swear there was a portrait series of bouncy Baywatch divas at the stations from Padua down to Bari.

My reaction to graffiti used to be one of anger. After a few years playing in the traffic at Lampson Street School as the crossing guard, I got tired of lying to 2nd graders about the misspelled profanities spray painted by functionally illiterate 14 year olds on the gray switch box.  “Gee, Mrs. Blaseckie, are you sure that’s ‘bicycle’ in Ukrainian?”

Now I try to draw a line between the verbal barf of most tagging and those rare flashes of misguided talent. Happily, people like Tom Woods use these young artists to increase the amount of acceptable public art for us all to share. Esquimalt is filled with mosaics and panels painted during the first years of Rock Solid. The Teflon postal boxes are a brilliant concept although my one complaint is I haven’t seen any around my stomping grounds, which includes the Esquimalt Plaza and the Head Street Mail Box – one I always think twice about trusting with anything more important then a bill payment.

When graduating students at our High School wrote their final thoughts in a celebration of chalk, paint and pavement for this years student body, I wonder if the city wide adverse publicity this act received was truly deserved. When the same thing happened a few weeks later on Moss Street, the publicity came down hard on those authorities trying to have the street art removed.

Now I don’t live in either neighborhood, although I’ve gone by the street behind Esquimalt High many times over the years, noticed it covered with chalk and paint designs and thought little of it. It seems to me the painted thoughts of this group of students are supportive, don’t involve the digital bird salute or phrases you couldn’t repeat in front of a sailor, and no Volkswagens were harmed nor windows or ornamental vases smashed. Why make this year’s grads pay to turn an unusual greeting card back into dull, gray pavement? 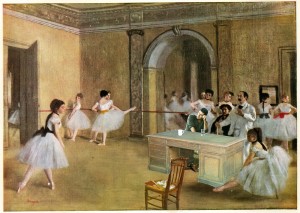 Michelangelo was one of the most criticized artists of his day, considered a criminal by others. Rossini was booed for The Barber of Seville. While alive Van Gogh couldn’t sell a painting to wrap fish and now the simplest of his sketches are worth millions.

More people need to learn to paint pictures of lemonade.

2 Responses to Graffiti or art in the post-modern renaissance